In popular discourse in the United States, Native peoples continue to be misrepresented and erased. Stereotypes, unawareness, and inaccurate history remain the norm, all influencing how Native peoples are treated by media, schools, and government. For example, while a 59% majority of Americans believe that it is “probably true” the U.S. government committed genocide against Native Americans, 53% still believe that Natives unfairly benefit from government money. This paradox in public opinion is representative of how Native peoples are generally understood by non-native people in the U.S. The persistence of these stereotypes are dangerous because they make people less willing to recognize contemporary injustices to Native peoples and tribes. Additionally, stereotypical portrayals of Native characters on TV and through sports mascots take stark psychological tolls on Native people’s wellbeing. In sum, the prevalence of harmful imagery around Native peoples in popular culture is inescapable. 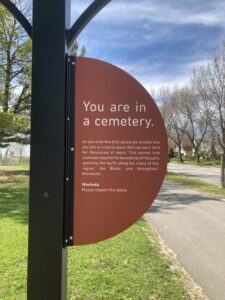 There is no straightforward solution to the problems stemming from misrepresentation and erasure, but narrative change efforts, an action that targets the stories, histories, and logic that support biased and inaccurate portrayals of Native peoples, are an essential place to start. In this photo below, it took years of relationship-building and discussion with Dakhóta people to make a powerful impact at Indian Mounds Park. In essence, Americans do not connect to the words burial mound like they do cemetery. Finally,  it is clear that this is not a place to sled down the burial mounds or dig into them for artifacts on a Sunday afternoon. This is a cemetery. Research suggests that after hearing accurate history about Native peoples, Americans across race, ethnicity, age, and education levels believe more should be done to help Native causes than is currently happening. There also seems to be growing support for narrative change efforts generally, as 72% of Americans say it is necessary to make significant changes to school curriculum involving Native peoples.

It is important to clarify that “narrative change” does not equate to the substitution of negative stereotypes for positive ones. Positive stereotypes– such as the idea that Native peoples are somehow naturally more spiritual or environmentally conscious than other people –also support inaccurate narratives which end up causing more harm than good. Nevertheless, what is clear is that narrative change efforts hold great promise for securing bright, Indigenous futures. These are the assumptions which frame the important work being done to combat misperception and erasure of Native peoples in Minnesota. Narrative change campaigns have started to shift the discourse around Native peoples in Minnesota. We hope to provide an overview of a few recent approaches to narrative change work in Minnesota by Native nations and organizations.

As mentioned previously, accurate portrayals of American history have the ability to inspire people to support Native causes. This is most effective when this revision of history reveals that the injustices of the past are connected to injustices today. Recent scholarship targeting the dominant Minnesota historical narrative, such as Mni Sota Makcoce: The Land of the Dakota does just this. The book’s central aim is simple: “to study the heritage of the Dakota people and to make all Minnesotans aware that Minnesota was and is the homeland of the Dakota.” Thus, although this work reframes the past, it gains significance from its public-facing goal to reshape contemporary understandings of history. The importance of this work is best understood through its definition of “master stories”: “stories through which groups of people come to understand reality and what is of ultimate importance.” Mni Sota Makoce rewrites the Minnesota master story by powerfully substituting the Dakota origin story at Bdote for the inaccurate settler narrative of manifest destiny and detailing the coercive measures by which land was seized from Dakota and Ojibwe people through treaties and violence. Despite this history often being tragic, the book never fails to highlight Dakota agency and resistance to the forces of settler colonialism. The central message of the book is, after all, that Dakota people are still here and this land is “Mni Sota Makoce– Land of the Dakota.”

The other main form of narrative change work emphasizes this contemporary presence of Native peoples in Minnesota. The digital era provides a convenient platform for this work, as Native nations and organizations develop their own websites and social media accounts. Two noteworthy examples are Shakopee Mdewakanton Sioux Community’s (SMSC) “Understand Native Minnesota” campaign and the organization We Are Still Here Minnesota.

SMSC’s donation records speak to their intense commitment to Native peoples’ wellbeing as well as the broader Minnesota community. For example, the nation recently launched Understand Native Minnesota, a campaign to “improve the Native American narrative in Minnesota schools.” Though only a few months old, this campaign has already organized a bimonthly digital newsletter that compiles news relating to narrative change in Minnesota and the country as well as a podcast.

We Are Still Here Minnesota is also a relatively new endeavor. This organization, a project of the Native Governance Center, formed in response to the Reclaiming Native Truth research and seeks to enact narrative change in Minnesota in realms including education, philanthropy, governance, media, and pop culture. An example of their work is a well-curated Facebook page that is a valuable resource for news, events, and other efforts related to narrative change.

« Back to All News

Please donate today and help us to be leaders in movements, to challenge all systems of oppression and dominant ideals that have devalued our authentic history and rights as Sovereign Nations. Join us in our commitment to lead the way towards positive and progressive change in Minnesota.